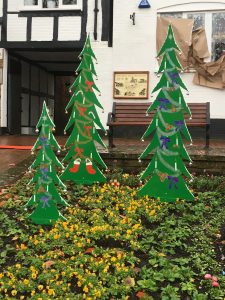 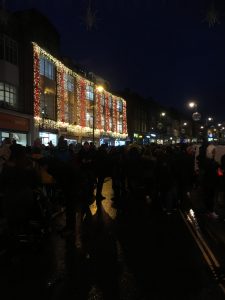 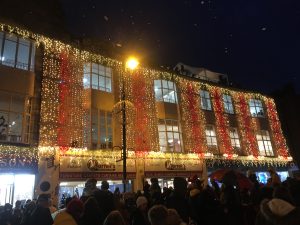 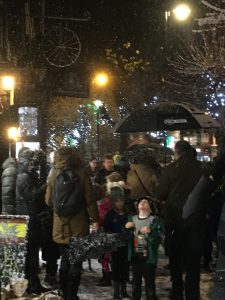 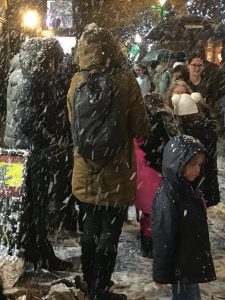 The town crier heralded the approaching festivities throughout the town as the East Grinstead Concert Band and Meridian Rotary Club started the entertainment for the tree lighting ceremony in the High Street with some help from Father Christmas and Chequer Mead Pantomime characters.

Sadly the weather wasn’t very festive as rain fell all day, however it didn’t dampen the spirits of East Grinstead residents.  Just like the ‘Pied Piper of Hamlin’, Matt Cole,(of Cole’s Estate Agents and  Chairman of the High Street traders Association) led the crowds along the London Road and High Street to ‘Reveal’ each festive window in turn. Lots of oohs and Ahhs followed the tearing off of brown paper and the traders hard work filled the town with festive cheer. The crowds were stopped by a surprise at Martells department store with a beautiful curtain of lights  and roof top concert by the Tar Babies, mimicking the Beatles’ famous 1969 London gig in Saville Row, before continuing to take in the rest of the windows.

At 5pm East Grinstead Town Mayor switched on the tree and town lights and was followed by entertainment from VOX, Urban City dance, Lauren V and Amber T.

The window reveals continued until late in to the evening fully supported by families and friends groups and the shops stayed open for some late night shopping until 8pm.

It was a magical evening despite the weather and the crowds were even treated to some festive snow outside some of the shops!  East Grinstead knows how to put on a show!

Now it’s over to the residents of East Grinstead to decide which of the fabulous windows is the best in a public vote. The winner gets a small trophu and the bragging rights until the same time next year! The voting forms can be picked up from and returned to  any of the participating businesses or the Tourist information desk in the library. The closing date is 30th November and the winner will be announced on social media.

Well done to all those who helped to pull the event together and to East Grinstead for ‘keeping it local’ Here’s wishing you a wonderful Christmas time.